The Colts made this long trip to Dalbeattie on a six game unbeaten run in all competitions, last week's victory over Junior giants Auchinleck Talbot in round two of the William Hill Scottish cup continuing the form that's ensured their last taste of defeat was at the beginning of September against Spartans.

And with a record of four wins and one draw on their travels so far the Broadwood men have certainly shown they're comfortable away from home, the overnight rain and heavy pitch not likely to perturb a fledgling side getting more comfortable with each other as every game passes.

Three clean sheets in their last four games, the visitors were forced into a defensive change with Sam George suspended following his dismissal against East Kilbride. On loan Celtic stopper Ross Doohan stepped in to make his full debut for the Colts between the sticks. That aside it was the same starting eleven, youngster Jordan Pirrie added to the bench for the first time following a string of impressive displays for the under 20 development side.

The visitors started brightly, playing up the slope in their yellow home kit, getting around the hosts back 3 on both sides with O'Neill in particular forcing the home defence to scramble low cross balls away for corners on more than one occasion. It was to be a pattern that forced double figure corners for the Colts in the first half and also prompted Dalbeattie to change their starting shape in an effort to keep the visitors at bay.

It was from one of their many corners that Colts fashioned the first real chance, Broadfoots delivery knocked back towards O'Neill who stepped off his position on the keeper to head towards goal, the stopper gathering reasonably comfortably. Selkirk declined a couple of opportunities to pull the trigger from just outside the area after working the space well, before flashing a header narrowly wide from another Broadfoot corner, but the tempo of the game started dropping on the heavy surface and that seemed to suit the home side more than the visitors.

For a ten minute spell the hosts put some pressure on the Colts defence, Ward making a fine defensive header to clear away a cross from the Colts left that looked to be finding the home striker before central defensive partner Oliver made two excellent interceptions of his own inside the area that stopped two attackers having efforts on goal in the same move.

Doohan in goal, who had mainly been used as an extra player in possession to this point, made an excellent save low to his left from a header from 8 yards before showing strength to punch away a high looping ball under some pressure, the official choosing not to give a foul when it looked an identical challenge to one which had warranted one at the other end, not for the last time of the afternoon.

With ten minutes till half time the Colts were again left scratching their heads. Ballantyne fouled the Dalbeattie attacker just outside the area, a foul and a yellow card 100%. However the midfielder was caught in the head by the attackers retaliation, left in some discomfort on the turf, right under the nose of both referee and assistant. The Dalbeattie bench, seeing clearly what had happened and furious at their own player for his reaction, obviously expected the worst. No action was taken.

From the resulting free kick the ball was cleared away high, Broadfoot picking up a yellow for a nothing foul in the central midfield area to compound visiting frustrations.

The clock ticking towards half time and it was the visitors who had the last chance, some decent football leading to Kirwan being tee'd up 20 yards out, the fullback getting his effort all wrong and firing high and wide of the Dalbeattie goal.

0-0 at half time in what was a fairly scrappy game football wise, Colts certainly not playing anything near the level they have set of late.

Into the second half and the men in yellow seemed more intent on getting efforts on target, Broadfoot having a couple of early sighters well save by the home stopper before Black struck the post at the end of a fine move, doubly unfortunate as he'd also been flagged offside.

The home side were being well marshalled by the stubborn Colts rear-guard, Dalbeattie not much of an attacking force in the second period, with Kirwan and in particular Duncan more of a threat down the flanks for the Colts. Selkirk picked up a booking before the Colts made their first change, Black coming off for Tilley. The wide man had an immediate impact, taking the ball from Duncan and skipping past a couple of challenges to win a corner.

From the kick Broadfoot delivered to the back post where Kirwan met it, heading back across goal and finding O'Neill in that same pocket he'd forced a save from in the first half, this time the Colts top scorer making no mistake as he planted his header beyond the keeper and man on the post from 4 yards.

More good play down the right led to a cross to the back post being headed down to Broadfoot who just couldn't work the space for a shot, the ball smuggled away for a corner.

The game though was made safe with just over 15 minutes to go, excellent work from Selkirk on the right touchline taking out two defenders and working the ball forward, Tilley released down the right by a fine pass. The wide man, as he did last week, kept a cool head, driving to the box before cutting back with power to O'Neill who dispatched from 6 yards with a lovely flick through his own legs. A fine finish at the end of a fine move.

Moments later Selkirk was replaced by David Brown, Broadfoot moving up top. And Brown nearly added a third from a Broadfoot corner, won by Duncan. Broadfoot delivered another excellent cross, Brown getting in front of his man to head powerfully towards goal, the stopper making a fantastic save to keep it at 2.

Kirwan had a couple of attempts blocked by the home defence before he was replaced by Lee Foggin who came on to make his debut for the club. The young fullback nearly provided a third as he linked with Broadfoot to deliver a wonderful ball from the left, O'Neill just unable to convert for his hat-trick at the back post.

Oliver and O'Neill picked up late bookings as the Colts defence stood firm, Brown making two commanding headers inside his own area, Ward and Oliver making their own headed clearances as the home side threw the ball into the box to try and find a late route back in.

The home side were left frustrated by the official as a challenge inside the the Colts box brought a reasonable claim for a penalty. One of those where it was either a spot kick or a goal kick, the defender having made no contact with the ball in teh challenge. As is often the case though, a corner was the outcome.

It wasn't to be for Dalbeattie and 2-0 it finished to the Colts, making it an impressive one goal conceded in their last five games, that an injury time penalty against East Kilbride. It also makes it five wins and one draw from their six away league matches so far and extends their unbeaten run to seven, moving them two places up the Lowland League table into sixth as they approach next week's half way stage away to Gretna 2008.

Not their best performance and certainly below the standard they have set in their last two games, but given the recent home results of Dalbeattie this is clearly a hard place to get a result so the Colts will have been happy to jump on the coach back to Broadwood with a deserved three points in the bag and both their away and unbeaten record intact. 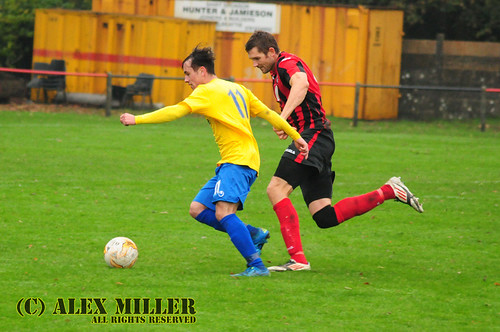