Twas the week before Christmas when all through the house, Colts travelled to Meadowbank to take on the champs, or some other such festive type introduction! On a rather blustery day in the Capital the former Commonwealth Stadium played host to the reverse of the Colts second ever senior game, where a late winner at Broadwood by Ross Allum, his second of the game, gave City the points. There was more than a little deja vu on the day here.

With Ballantyne suspended and Black injured, coupled with the recent departures of Benton and Doohan, there were a few changes in the Colts squad. Munn and Tilley started in a midfield five alongside Barclay, Broadfoot and O'Neill. On the bench under 20's duo Milne and Pirrie were added along with trialist Drew Ramsay, Giles coming back into the squad also.

Playing against the wind first half the Colts clearly had a game plan that involved sitting in and frustrating their hosts and for the most part it worked well, City enjoying plenty of the ball but unable to fashion much in the way of clear cut chances, George fielding comfortably from several long range efforts.

On the flip side the men in yellow were finding it hard to trouble to home goal at all in the first period, the stubborn City rear-guard the foundation on which their success appears to be built standing strong against the Colts who struggled to find a way through with the wind in their face.

With that said the hosts only went in one goal to the good at the half and it was that man again Allum making it 3 in 1.5 games against Colts, his movement from behind across the front of Ward seeing him get his head on a ball delivered with pace from the City right and head beyond George in goal from 12 yards. Colts will feel their line was perhaps a little deep, but it was a fine header from the City striker to break the deadlock.

Into the second period and there was an early let-off for the visitors when a square ball from Broadfoot was cut out just outside the Colts box. With a square ball to Allum or an effort on goal available as options Mushin opted to shoot, George in goal saving with Allum unhappy the rebound wasn't squared to him for a tap in.

That though proved to be the catalyst for Colts best period in the game where for around 20 minutes they caused some problems for City, dragged themselves back into the game and were a little upset at a couple of decisions that may have seen them take charge.

The equaliser came from the penalty spot, Duncan charging forward from right back and beating a couple of men before being felled by what looked to be 3 City defenders in the area. Broadfoot stepped up and sent the home keeper the wrong way to level the scores.

No more than 5 minutes later Colts should have had a second penalty as Selkirk flicked a long ball into the path of O'Neill who, in a race with the impressive Mbu, got their first just inside the area, knocking the ball on with his head. Mbu, committed to winning the header, wiped the forward out (pictured) with the momentum in his challenge. Far more a penalty than the first and given the position likely a red for the big defender, but the official waved play on much to the frustration of the visiting fans and players.

Another moment of controversy followed as Broadfoot swung in a fine free kick from the Colts left that was headed toward goal. The City keeper dived full stretch to his right to claw the ball away low, Selkirk and O'Neill closest to the action adamant the ball had crossed the line, again play on waved.


In truth, given the pattern of the game, it would have been fortuitous to say the least had the Colts found themselves 3-1 up and playing against ten, but on another day that could easily have been the situation. As it turned out those moments provided the inspiration the home side needed and they grabbed the lead with 5 minutes remaining after firing a warning shot moments before.

The warning shot came from the home substitute who found himself in the box at the end of a fine passing move but fired narrowly wide of George's right hand post when it looked a certain goal. The second though came only moments later.

With all the fine passing football they had played on the day there was something ironic in that it came from a long, high, looping ball into the box, Oliver momentarily caught under it and losing his bearings up against Allum. Unfortunately for the Colts leaving the striker alone for a second usually only ends one way, Allum plucking the ball from the air with his left before firing an unstoppable effort high into the top corner from an acute angle with George in goal helpless. Another superb finish by the hitman, making it four in two games against the Colts, but on reflection the visitors will feel they could have defended the situation better.

Into the 90th minute and with the Colts chasing for a second equaliser City made it safe with a fine flowing move, passing their way down the right before squaring to Dunn arriving on six yards who took his first touch around George to tap in the clincher. Again, Colts will feel they may have defended the situation better, but from the home side's perspective a fine goal.

There was one last chance for Colts as Broadfoot made a fine run beyond the city defence and was picked out by an excellent pass. The midfielder gathered a difficult ball well but under heavy pressure lifted narrowly over the bar in attempting to lob the keeper.

So, Colts 3 month unbeaten league run comes to an end and on balance of play a deserved win for the home side, however on another day had decisions gone their way Colts may have stolen something from a game in which their hosts enjoyed the majority of the ball and chances.

Colts start 2016 with another tough away game, travelling to K Park to take on in form East Kilbride on January second. 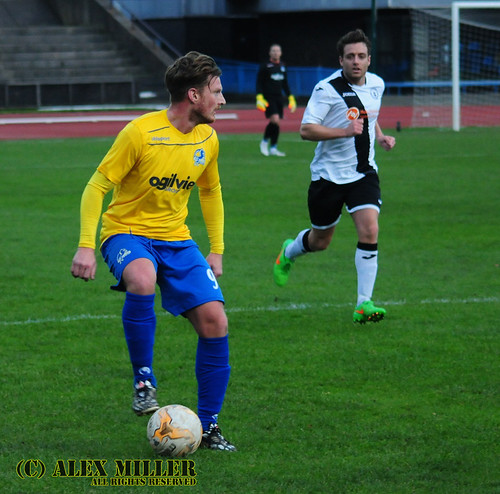