Colts final home league game of the 2015/16 season, their inaugural year as a senior side, brought Selkirk to Broadwood on a warm, sunny April afternoon. With the youngsters on show all morning for the penalty shout-out competition there was something of a carnival atmosphere inside the stadium, but unfortunately the football on show fell somewhat short of expectation as the Colts put in what would be their poorest home display of the season.

With skipper Ward injured, deputy Ballantyne recovering from a knee operation (we all wish Ross a speedy recovery!) and Selkirk suspended there were changes in the home lineup. Duncan moved forward with Ramsay coming in at left back and Morris made his first start for the club at centre half. 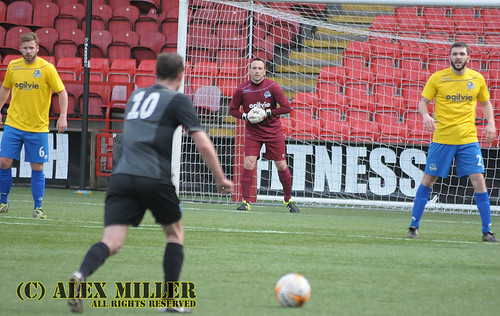 The game started reasonably well, Black coming close with a snapshot from 18 yards when he had more time than he perhaps realised and Hunter narrowly missed connecting with a Duncan cross form the right where any touch would have been a goal.

As the game ticked beyond 10 minutes though it became a war of attrition between both sides, continually giving the ball away without causing each other much in the way of problem. There was one moment though for each side in the first half, Fahey making an excellent save from close range from the Selkirk forward following a mistake from Ramsay. At the other end Hunter, when it looked like a lob was the easy option, squared to O'Neill who saw the keeper dive at his feet to keep the ball out of the net. AS a result of the challenge O'Neill stayed off the field for some time receiving treatment.

At half time Colts replaced Ramsay with youngster Pirrie as the looked to gain some control of the ball in midfield and Selkirk were forced into their second change of the day as their captain limped off, following ex Scotland International David Robertson who was replaced around the half hour.

Colts had issues of their own as O'Neill succumbed to a series of injuries five minutes into the half, replaced by McDonald with Hunter moving to the left.

It was the away side who made the better of the chances in the second half, Fahey making a wonderful save to tip over from a close range drive before looking sharp again to flick onto the inside of the post when left exposed, getting his reward as the ball bounced back into his hands.

Hunter had a chance for Colts as he turned in the box to shoot at goal, but never made proper contact allowing the keeper to smuggle away.

With a little under 5 minutes remaining though Colts grabbed the goal they thought would claim the points. Broadfoot, so often the provider, delivered to the back post where stand in skipper Oliver headed in off the inside of the post for 1-0.

They were almost pegged back instantly though, the official playing advantage from a Morris foul on 18 yards with the Selkirk forward firing into the bottom corner beyond Fahey who had no chance. Much to their surprise, the goal was chalked off for offside with the play being brought back for the initial foul, the free kick smacked against the wall.

And that proved to be that, 1-0 to the Colts and Selkirk will feel a little upset to have gone away with nothing as neither side really deserved the points from a game that certainly wasn't one for the spectators! Nonetheless four wins from four for Colts, all very different wins indeed, as they look to cement that fourth spot in the table. One more win is required to cap what will be an excellent debut season, with their next game away to Vale of Leithen on Saturday