In a season of firsts for the Colts today's William Hill Scottish Cup second round tie was another little bit of history in the making. The first time the club has entered the Senior competition and already in Round 2, could they go one step further and make round 3?

It would be no easy task, that's for sure, as the draw paired them with the side that many consider to be the benchmark for non-league football in Scotland, Auchinleck Talbot of the Junior ranks. Five Scottish Junior cups in the last decade, three in the last five years including last season. Three straight West Region Superleague titles in succession and the only team to play in the top league for all thirteen seasons of the superleague era, finishing outside the top three only four times in those thirteen seasons. There could be no complacency in the Colts ranks, the pedigree of their opponents was unquestionable.

With that said this fledgling Colts side, not yet four months together, have already surprised more than a few in their short time as a group, growing as the weeks pass and in a fine run of form themselves coming into this game, five unbeaten since being humbled by Spartans in early September.

There was little in the way of surprise in the Colts starting lineup, the same eleven who started at against East Kilbride in their last fixture taking to the field again following that fine performance and in the Cumbernauld drizzle the home side got the game underway.

The first half, it's fair to say, was the type of blood and thunder cup tie you would expect given the occasion and the teams involved, neither managing to create anything in the way of clear cut chances. The impressive O'Neill came closest for Colts, showing great strength to shrug off two Talbot challengers before skipping past a third and curling narrowly beyond the far post from just inside the goalline on the left. For Talbot, their best effort was a strike from distance which George watched comfortably pass his right hand post.

The visitors were very much playing the direct style that it was clear their hosts expected, going long on an almost universal basis and looking to pick up on the second balls. Munn, Broadfoot and Ballantyne though were expectant, doing great work in front of their defence to pick up any second balls before their Talbot counterparts. On the rare occasion the visitors did get there first, there was plenty of pressure. That pressure though led to 3 cards in quick succession for the midfield trio, leaving them walking something of a tightrope.

Defensively the men in yellow were strong, Oliver and Ward standing firm centrally to anything being thrown their way in a back four that's looking more solid by the game with Duncan and Kirwan assisting both ways in the fullback areas.

On the few occasions that the Colts managed to get the ball down and play it was clear they had the tools to hurt their opponents and as the sides went in at the half 0-0 this would surely be the message being passed on in the home dressing room. As the second half started, it certainly appeared that way as the home side started to move the ball faster, through the Talbot lines creating good opportunities.

On the day the visiting keeper had two outstanding saves, the first from Broadfoot. Following some excellent build-up play down the right between Ballantyne, Duncan and O'Neill the midfielder burst into the box on the right. As he dropped his shoulder and moved to the left he appeared to be clipped, the home dugout claiming penalty. Just a slip though and as the midfielder started to fall he managed to connect with a wonderful left foot drive that looked destined for the top corner until the stopper threw himself full stretch to his right to tip round the post. Fantastic save.

Next up it was Blair Munn on the end of another fine Colts move, short sharp passing getting them into the final third and a quick switch of play through midfield allowing Munn to be tee'd up 25 yards from goal. The diminutive midfielder struck with his right, his drive arrowing towards the bottom corner as the keeper again dived full stretch to his right to save, O'Neill on the rebound flagged offside.

At the other end two super tackles from Munn and Ballantyne halted Talbot advances as the Colts rear-guard limited their visitors to very little. There was a heart in mouth moment though as a drive from 25 yards took a deflection on the edge of the area with George already on the move, the keeper showing great reactions to throw his legs back and clear away. That effort, a comfortably saved free kick and a shot wide from 20 yards were all the impressive Colts defence allowed in terms of chances in the half, nothing that could really be described as a chance at all.

As the clocked ticked past the hour the Colts were in the ascendancy, looking for the goal their play deserved and on 65 minutes they got it through an excellent Jamie Broadfoot finish. O'Neill, whose influence on the game was growing with each minute, popped up on the right and as Selkirk pulled the centre back deep lifted a wonderful through ball into the well timed run of Broadfoot going into the space created. As much as the keeper had kept the score 0-0 before this, he made a poor call here, rushing out not expecting Broadfoot to take a brilliant first touch that took him out of the game. From a tight angle the midfielder finished superbly, assisted by Tilley in the centre stopping the covering defender from being able to get back in to clear away.

In a bid to get back into the game Talbot changed their shape, which left more space for the home side to exploit and that's exactly what they did, Tilley embarking on two fine runs that ended in efforts on goal while Selkirk and O'Neill also missed out narrowly.

Selkirk, who put in a tireless shift for his side and caused the Talbot defence problems all day with his movement and ability on the ball was replaced by Grant with 15 to go having run himself cramp. Broadfoot moved up top to allow Grant to slip into midfield and having scored the first played his part in the second along with O'Neill.

The little winger broke on the left, receiving from Ballantyne and played down the line to Broadfoot. Broadfoot sucked in two players before splitting them with a flick back inside to O'Neill, O'Neill switching quickly to Tilley on the right who was 1v1 with his defender. Tilley dropped the shoulder and slipped outside his man with ease, picked his head up and rolled brilliantly back into the late run of Munn on the edge of the area, Munn slotting coolly to the keepers bottom right with the stopper and covering defenders no chance. 90 minutes, 2-0, queue Colts celebrations as the Talbot fans realised their Scottish Cup adventure was over for this year.

That was Munn's last action, replaced by David Brown after the celebrations suffering cramp. After 4 minutes of injury time the final whistle went, the Colts through to the third round for the first time and putting in a performance for the club and town to be proud of, winning against a club with a fantastic history of success who many thought would be too much for them. There will certainly be many looking on with excitement when next week's third round draw takes place.

Before that game comes around though it's back to league business for the men from Broadwood, starting away to Dalbeattie Star next weekend, 14:00 kickoff. They will be hoping they can keep their run going, 6 unbeaten now, hopefully climbing the league table in the process. They will also hope that performances and victories such as todays win them a few new fans around Cumbernauld, a local team to be proud of. 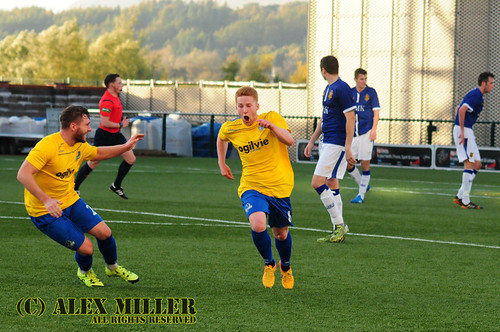