Déjŕ vu in every sense for the Colts as they travelled to Ainslie Park for the second week running to take on Spartans, this time in the South of Scotland cup. Despite the early snow there were no issues with the artificial surface, Colts kicking off with yet more changes to the starting eleven.

On top of injuries to Broadfoot, Selkirk and McDonald, David Brown was unavailable, Barclay was serving a one match suspension and Ramsay was cup tied. It meant first senior competitive starts for Under 20 duo Jordan Pirrie and Jeff Fergus, reward for their fine season in the development squad. Black joined the bench despite nursing a broken toe alongside Sean Brown, working his way back from a 7 month layoff through illness and further under 20's squad members Cammy McKay and Ryan Milne. 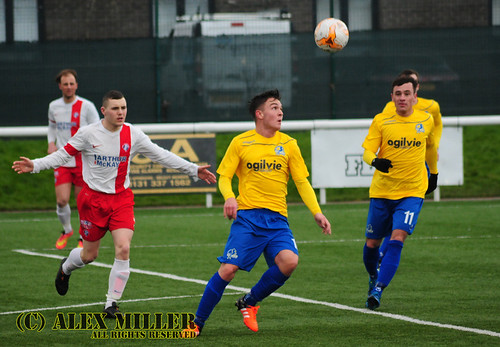 In the first half it was clear that the Colts were employing a similar game plan that they felt should have brought reward last week, but the same issue was to haunt them today as they created but failed to convert from a number of good chances.

The first chance of any note fell to the home side, Fahey looking sharp to turn round the post from 8 yards as the forward ran onto a loose ball inside the area. After this though it was Colts though who had the best of the first half chances.

Duncan linked with O'Neill on the right and fired a wonderful ball across goal that evaded Fergus by inches, before Hunter exchanged passes with O'Neill who squared similarly from the right, this time the ball falling just behind both Hunter and Fergus in the middle.

O'Neill and Pirrie had efforts from distance while Davidson headed a Munn corner wide from 8 yards. Another quick break down the right saw Duncan again provide a wonderful delivery into the centre, this time Fergus did get there but on the stretch from 6 yards could only find the keepers gloves.

The best chance of the half though fell to Hunter, played through one on one versus the keeper and with no defender near. With O'Neill bursting to offer the square ball for the tap in the forward, normally decisive in these situations, was caught in two minds and his touch to round the keeper was too heavy, leaving a finish impossible.

With the official not enjoying one of his better days he left the away side incensed just before the break as O'Neill was clearly fouled in the box, staying on his feet but only managing to win a corner. When questioned on the decision his assistant explained that the foul had not been given because advantage had been played. It seems a corner in the mind of the officials is advantage over a penalty!

0-0 at half time and again despite surrendering the majority of possession to their hosts the Colts limited them to very little in front of goal and themselves had the better of the chances, both in terms of number and their nature.

Into the second half and O'Neill picked up an early booking for a frustrated foul committed after he himself had been the victim of one of an increasing number of heavy fouls allowed to go for the home side. Two similar challenges seconds apart only bringing punishment for O'Neill, again explained as advantage having been played.

Neither keeper was being unduly troubled until a moment of brilliance from O'Neill nearly caught out Carswell in the home goal, his chipped effort from 35 yards tipped over at the last by the stopper with Davidson heading the resulting Munn corner wide.

Given the chances created and missed over the two ties so far it seemed it was going to take something special for the Colts to take the lead. When the goal came that's exactly what it was. Munn stepped inside a challenge from 25 yards and fired a curling effort with the outside of his right foot which crashed into the net off the underside of the crossbar, the impressive Spartans keeper this time helpless to stop it.

1-0 to Colts and soon after Kirwan and Munn picked up warranted yellows for heavy fouls. As the game wore on though it seemed only players wearing yellow would receive yellow cards.

With the clock ticking towards full time a moment of inexperience from the Colts allowed their hosts a late lifeline. 1-0 up in a cup tie heading into injury time and between them Hunter and O'Neill robbed the ball from the Spartans defence and made towards the home goal.

No need to flood players forward in this situation, just leave the two of them to it, but the Colts ended up with 2 extra men bursting into the box and when O'Neill found the gloves of the keeper from the shot with his left, that meant 4 players caught ahead of the ball.

That allowed Spartans to break with an overload and within seconds excellent feet from the impressive Greenhill brought a penalty from a clip from Oliver, though in truth the central defender had to make some sort of tackle or it would likely have been a goal anyway, the fatal mistakes from Colts happening long before the ball got to their box.

1-1 and into extra time the game went.

Neither team created anything of note in the opening 15 minutes, though there was another moment of real frustration for the visitors as the match official again turned a blind eye, this time to an awful challenge on Colts keeper Fahey. No malice in it, no-one could question that, but when you throw yourself into a 50-50 stretching for the ball and on said stretch straight leg the standing goalkeeper in the thigh when he has the ball in his hands (leaving a clear set of stud marks for the official to see), in any game in the world you would expect to see a red card. On the day it didn't even warrant a talking to.

Into the second half and Colts had a decent chance to take the lead as Black skipped past two challenges and looked to square to Hunter who was free in the middle but the experienced Malone did brilliantly to cut out the ball when he found himself in a 2 on 1 against situation.

And the missed chances throughout the game would come back to haunt the Colts as they again contributed to their own downfall, defending poorly against a short home corner. No second man went out to close down the most dangerous player on the park David Greenhill, who delivered a wonderful whipped cross from the left with his right foot, the home defender getting his toe on the ball in front of Fahey to poke into goal from 6 yards.

Another poor goal for Colts to lose and absolutely preventable, but credit to the home side for exploiting the weakness. And in Greenhill Spartans surely have one of if not the most impressive central midfielder in the Lowland League. In the three games with Colts he has certainly been involved in everything good that Spartans have done.

Brown made his initial return from injury with 5 minutes remaining, coming on for Hunter who had picked up a dead leg and was struggling to move. Still a ways to go for the striker but his instincts nearly brought him a late chance as he drifted into space in the area, the ball arriving into his path but Malone made another excellent last ditch diving challenge to nip the ball off the strikers toes and turn the ball out for a…….goal kick. That was that for the day.

Over the two games Colts will be frustrated to have taken nothing given the chances created and missed. In the league game Spartans probably shaded the game and deserved the three points, even if 3-0 wasn't particularly representative of the actual game. Today though the Colts should have won the game, contributing to their own downfall with poor decision making at key stages in the tie but they will hopefully learn from the experience.